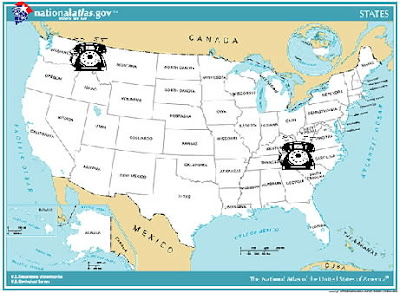 Well, I have had an exciting day today thanks be to Alexander Graham Bell.
I have been on the phone most of the day.

It all started with my talking to my sister this morning and then I called my best friend Jean. You remember the one that was canning pork the last time I called...well she wasn't canning anything today so we reminisced about a lot of things in our growing up years. Her dad used to sit and tell me stories by the hour. I wish I could remember all of them. I asked him once how he met his wife. He went into great detail to tell me exactly how they met and where they went and what they did. If he missed a small detail his wife would interject "Now Herg, that's not was the way it went, it was like this". Then they would have a little discussion about it and in the end it happened just the way he told me. They were happily married for more than 61 and a 1/2 years before he passed away in 2006. I think of him often with happy memories.

Now while I was talking to my friend she told me about a lady that made chicken and dumplings for all of the church socials so I thought I would get the recipe. Actually I didn't get to talk to her but did have a nice conversation with her husband and promised I would call back and get the recipe.

Next I had a couple of family history questions I needed to straighten out so I called the person that I thought could best answer my question. Well, I had a great conversation with both him and his wife and found the information I needed to know. We talked awhile about things in the past and she shared with me a couple of ways to preserve foods. I will write those in a later post. She also told me about a lady who had written a couple books about the area. She gave me the name and when I discovered her maiden name was Henson. I just had to pick up the phone and call her.

What a delightful lady she was. I spent a good half hour speaking with her about a variety of subjects, where she lived, where I lived, how we were related and her books. She gave me some pointers about writing and told me about a writers group she belongs to in Boone NC. We exchanged email addresses and promised to keep in touch. This is definitely one lady I would like to get to know better.

And Now About Scott's walk:
On Day 3 he walked 33 miles for a total of almost 85 miles in the three days. He had trouble with a rock in his shoe and had an epson salt foot bath. His spirits were good. He had internet connection and sent me this email.

Thanks so much Jenny for your encouraging words... One thing we all need
to do is "get involved". Contact your Congressman office and express
your support so they will get the message.
Thanks again and please stay in touch..
Have a Nice Day,
Scott Teague

Thank you Scott for making a stand and holding on tight to your conviction. I will keep following your progress as you make your way to Washington D C.
For more information or if you are interested in following his daily walk to the steps of the U. S. Capitol you can find it at http://www.tencommandmentswalk.com/.

That's it for Today.
Posted by Jenny Johnson at 4:49 PM

Jenny, please check out this website: http://publishing4profit.com/myblogs/
It is by Nick Russell, who publishes the Gypsy Journal, and whose blog is on my list. He has some very good suggestions in this website and I am thinking seriously about it myself. I just know you would be a natural for writing a book!
gypsy

Love the new look!! And I always enjoy your stories.

Hey girl...You know we always follow you and love to read your stories. I noticed that you cancelled out of the Kerrville "Gathering" We sure were hoping to see you there...we both miss you and want to see you. Also have not seen you on chat lately. I know I have been jammed out but when I do get on you are never there. Hope all is OK with you.