Well, I had to go far back in the recesses of my itty bitty pea brain for today's post. A couple of years ago an old school friend sent me this photo. This is the first school I went to.

The photo was taken in 1951 the year before I started school. There are some people I recognize in the photo. My first teacher, Ms Rena, who taught the small grades is standing on the end in the back row. Next to her is our cook Ms. Winnie. On the other end is the other teacher who taught the high grades and was also the principal. I can't remember his name. 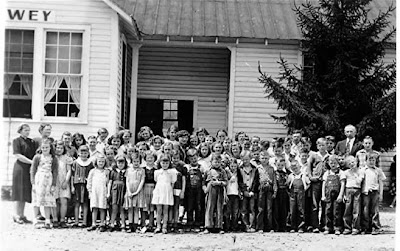 The school was located about a mile from where we lived. It stood at the end of the holler next to the big highway. It was built sometime in the late 1920's. It was named for the Dewey community in which we lived and thus became known as the Dewey School.

This was the second school in the community. The first was up the road about a quarter of a mile. It was also named Dewey school. The story goes that late one night two of the students who obviously didn't like to go to school set fire to it and burned it down.

I started to school in 1952. It was the first year that the county had school buses to pick up the children. Prior to that they walked or were driven by one of the parents who had a car. Some students walked three or four miles one way just to go to school. Our bus was one of those little short buses. The year after we got a big bus and the little bus was used to transport the black students in town forty miles to school.

The school had two rooms. There were four grades in each room. The rooms were the same size but were called the Big Room for the bigger kids and the Small Room for the smaller kids. There were doors that folded back to make it one big room. Each room had its own cloak room to hang our coats and boots. There was also a kitchen where Ms. Winnie and Ms. Hazel prepared our lunch. We had a bucket with one dipper for all the kids to drink out of.

There was a belfrey with a big old bell which was rang by the principal before school at recess, lunch and when school ended. I remember asking one time if I could ring the bell. He told me if I did that I would be sucked up into the belfrey and never come down.

There were no bathrooms. We had an out house on each side of the school. One for the boys and one for the girls. That worked out just fine until one day we had a small tornado touch down and destroyed the boys out house. Then we had a common out house.

I don't remember the girls having jobs at school but the boys had to go out to the coal shed to bring in the coal and wood kindling for the big pot bellied stove and they had to shake the erasers at the end of the day.

The year after I started school, all the schools in Johnson county were consolidated and they did away with all the two room schools. We were bussed about five miles to the big new modern Doe School which had a separate room for each class, water coolers, two large bathrooms and a gym. This school is still in use today.

Posted by Jenny Johnson at 7:10 AM

They had to give the boys lots of jobs just so they didn't have enough time to get in trouble.

Jenny,
Thanks for the info. on Dewey School. I never went to Dewey. I went to Doe when it was built. I must have gone to Mtn. City Elementary school for a year or two. It was good to hear from you.
Pete Shoun

Thanks for the link to your website. I enjoyed the valentines too. I saved mine in school. And I can remember the big valentine boxes we had in each room in my elementary school.
Was this teacher Rena Shoun ?
She was my 5th grade teacher at Trade in the '60's. and her husband Ray Shoun was my high school science teacher. Also, Mr Pete Shoun was my health teacher at JCHS.