These frosty mornings in the fall  remind me of gathering crops in the old days. The farmers always raced to get their corn crops cut before frost  We always raised a big corn patch which served to feed not only us but the animals as well.

When the corn was ready to be cut it was cut stalk by stalk with a  knife called a corn knife.  The blades on a corn knife were straight or curved, on long and short handles   The corn was cut about a foot from the ground and on a slant.  The corn was then put it into shocks and in a couple weeks  after it had dried out and was ready to shuck

To make a shock you left about four or five stalks standing and then used a corn knife to cut an armful and lay it on a piece of twine and then tie it up.  The bunches were stood up in a circle that made the shock.   Another piece of twine was tied very tight around the whole shock this kept it from blowing down.

After a couple weeks of being left to dry the shucking would begin.  The wagon was pulled up alongside the shocks and when it was full it was pulled to the corn crib where it would be stored for feeding to the animals or for grinding to take to mill for cornmeal.

One year my dad had cut and shocked his corn.  It was a full moon and he  and his brother decided they would sit up all night and shuck corn.  Of course, I am sure they had had a "little nip" or two.  They were sitting shucking and talking and my mother decided she would see what they were up too so she walked out to the cornfield.  My uncle saw her sneaking up on my dad  and he started talking.

"Roy, Aren't you afraid  of living out here in the country"?

"Aren't there boogers and haints out here"

"There's no such thing as a booger or haint".

"What would you do if  you saw something scary out here"?

"I've never seen anything I was scared of".

About that time my mother laid her hand on my dads shoulder .  He threw his cornshucker, jumped over the fodder shock and took off running for the house while my uncle and mother roared with laughter.

It was springtime when they plowed the field for the next corn crop when he found his cornshucker.

My grandmother believed in a lot of herbs and medicines and had a cure for everything - even the common cold. She used Mullein tea for bronchitis, a mustard plaster for congestion, or a clove or two of garlic crushed and stirred into some warm milk. Now that may not cure your cold but it will sure scare the heck out of one.

To cure the sore throat you had to gargle with salt water and she always told me "drink a little bit, it'll help". A tall glass of liniment was always in order too. That'll stop your cough. We had this couple who used to come around about once a month selling Raleigh products . There was always a bottle of this liniment in the cupboard. Any time you got sick you were made to drink this vile tasting stuff. It must have worked because it is still on the market today.

Camphorated salve was another cure, my grandmother would grease my chest, the bottoms of my feet, dress me in my flannel nightgown and into bed underneath the big featherbed I would go. I dont know if it was the salve, the flannel or the heat but it always cured me.

A man went to see his doctor because he was suffering from a miserable cold. His doctor prescribed some pills, but they didn't help.On his next visit the doctor gave him a shot, but that didn't do any good.On his third visit the doctor told the man to go home and take a hot bath. As soon as he was finished bathing he was to throw open all the windows and stands in the draft."But doc," protested the patient, "if I do that, I'll get pneumonia.""I know," said the doctor. "I can cure pneumonia."

That's it for today!
Posted by Jenny Johnson at 4:42 AM No comments:

My blog has been seriously neglected these past couple of years due to the full time running of a restaurant.  Now that is all behind me, the restaurant has closed due to health reasons and I find myself with more time to devote to my writing.

I am continuing to write my stories of growing up such as making apple butter, churning buttermilk, making quilts and every day life of the 1950's and 60's.

I am also looking forward to devoting more time to traveling and seeing this great country of ours for as long as my health will permit.

Thank you to my long time readers (even when I was not here) I appreciate your friendship and support.

From the archives of my blogs here is the story of have I got my name.


A Squirrel, A Sack and A Name
I Grew up in the state of Tennessee, the county of Johnson, the city of Mountain City, and the hamlets of Dewey and Doe Valley. We lived way out in the country about five miles from town...


My story begins when I was born on a place called Shupetown Road. My paternal grandmother was a midwife. She was also a medicine woman and used a lot of herbs and old wives tales for practicing her doctoring. She was born and raised in a place called Old Butler which is under Watauga Lake today. In her midwifery duties she delivered or helped to deliver lots of babies including four of my siblings. Today it is not uncommon to run into people she delivered.
On the morning I was born my father had gotten up early, grabbed his gun, a flour sack in which to carry his catch and set off to go squirrel hunting in the woods back of our place. He had been able to bag a squirrel and he carried it home in that sack.

When he came through the door, his mother rushed up to him and said, "Roy, you just had a brand new baby girl, what are you going to call her? He looked at the sack with the squirrel and looked at me and said, "Virginia Rose". That's the story of how I got my name from a sack of flour.

And in the words of my Father, That's it for Today,
Posted by Jenny Johnson at 6:25 AM 3 comments:

So Here I Sit

It's three in the morning reminds me of an old Faron Young song "It's Four in the Morning" or a song written by Irving Berlin "Count your Blessings."

It's Been A Really Long Time

After a very long hiatus from blogging it is doubtful that there are any readers still out there, however, time marches on and people, places and circumstances change. In my absence here is a few things that have changed. Instead of being a full time RVer as I had planned I am now a restauranteur. In the spring of 2012 there was a little store/deli in the area that had closed. At that time I thought about opening it but then decided I needed to do more front porch sitting and plans fell by the wayside and someone else opened it. I watched as the new owner had lots of business at first but then it declined and there seemed to be fewer and fewer cars as I passed by. Then one day the "closed permanently" sign went up. I jumped at the chance to re-open it. One of the things on my bucket list had been to open a restaurant of some type and here was my chance. With thousands of ideas floating around in my head I took the plunge but not without a lot of apprehension, determination and hard work. 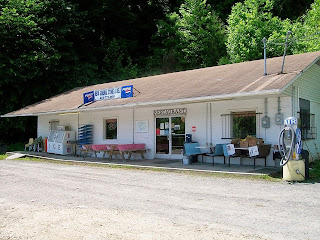 After a month of cleaning, fixing, painting etc. I was ready to open. Currently I have been open for almost one year. It has been one of the more rewarding experiences in my life. Maybe with more practice and self determination I wil get back into blogging again! That's it for today!
Posted by Jenny Johnson at 11:41 AM 12 comments: