Well, a month or two ago when I last posted I had "good intentions" of doing more blogging, however, the best intentions of mice and men---well in this case --me-- finds the time has gone and there are no posts. I have found the thoughts are in my head but they just don't jump on the paper the way I want them to or sometimes the way I think they should.

So my "good intentions" are to post more often and try to keep every one up to date on what I have been doing.
Vacation this year was planned around the "Camp With Lisa II" gathering at Carthage TN.

It was a beautiful Monday for a drive of 300 miles. From Tennessee into Virginia and onto the freeway Knoxville was looming ahead and a stop at Camping World. I was anticipating an hour or two to look around, however, that was not the case....it was a quick in and out ...don't look, don't touch.....daylights a burnin' kind of stop.

and it was on to Cordell Hull Lake near Carthage TN.

We arrived to a great group of friends and Mac's "Wonderful, Out of This World, Lip Smackin', Sauce on Your Fingers, Three Napkin BBQ Ribs. My mouth is still drooling for just one more bite of Kathy's great salad.

Tuesday was a great day with blue skies and sunny temps. A walk about the lake proved to be just as beautiful as it was last year. 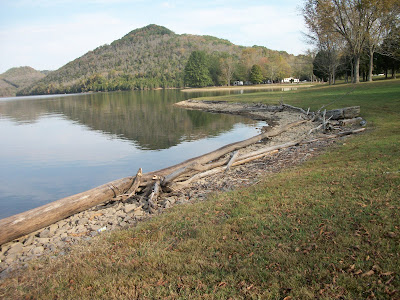 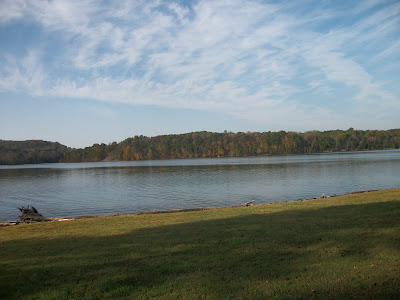 A little shopping at the local Walmart, dinner and settling back with a couple of movies-----

AND THEN IT HAPPENED

It started with a little indigestion, which got consistently worse, a rapidly increasing heartbeat and increase in blood pressure. After taking a couple blood pressure pills with no relief it was determined that 911 should be called. The paramedics were soon on their way and we were very quickly escorted to the hospital. I did take a minute to let Mack and Lynette know where we were going and they being the great friends that they are beat ME to the hospital.

Driving that big truck in a strange city with no clue as to where I was going (I lost the ambulance) was an experience I don't want to repeat. I ended up on a back street somewhere in the middle of Podunky Carthage but I eventually got my bearings, found the local Walmart, got directions and drove straight to the hospital. By the time I got there Don was admitted to the hospital with a heart attack and eventually was transferred to St Thomas Heart Institute in Nashville for surgery.

That ride was another "do not repeat" experience - 97 to 100 miles an hour in the front seat of an ambulance watching crazy drivers do strange things like cut in front of an ambulance when they hear lights and sirens. It gives one a whole new perspective and a silent vow to quickly pull to the side of the road and stop at the first sound of an emergency vehicle. 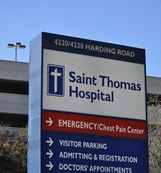 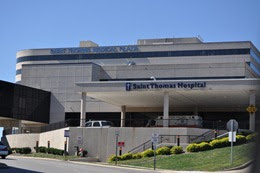 If you are going to have a heart attack and need surgery this is one of the best. St Thomas has recieved many accolades and honors. This information was taken from their website.

Saint Thomas Hospital has been ranked as high performing in five specialties, including cardiology and heart surgery, gastroenterology, geriatrics, orthopedics and pulmonology, and No. 2 in the Nashville metro area in U.S. News Media & World Report’s 2011-12 Best Hospitals list.

Cardiologists at Saint Thomas Hospital are the first in Tennessee to offer the Arctic Front® Cardiac CryoAblation Catheter system, the first and only cryoballoon in the United States indicated to treat drug refractory recurrent symptomatic paroxysmal atrial fibrillation (PAF), a serious heart rhythm disorder that affects millions of Americans.

We were treated very well but were greatly relieved when it was time to go home to the campground. Our friends Mac and Lynette were waiting outside the front door to chauffer us back to the campground. I do have to say we didn't travel as fast going back as we did getting there.

.....And another thing I have to say you can't have any better friends that Mac and Lynnette. They were there the minute we got to the hospital (well, before me) and they stayed with me until we were sure Don was going to be admitted making sure I didnt need anything. The next day together with Kathy and Chuck they came to visit bringing things they thought I would need and even loaned us two cell phone chargers to charge our cell phones while they shared one between the two of them. Many thanks to Chuck for seeing the truck got home safely and to him and Mac for stowing the awning and outside belongings so they didn't end up in the middle of the lake somewhere. When it was time to go home they were right there offering assistance.

RV'ers are some of the nicest people in the world and Mac and Lynnette are certainly two of the most wonderful RVing friends anyone could have. Many thanks to both of them and also to all our friends and families for all the phone calls, facebook messages, cards, visits, thoughts and prayers offered on Don's behalf.

Now that we were safely back at the campground it was rest and recuperation for a few days and time to be on our way home. That's it for today -- Until next time.

Posted by Jenny Johnson at 5:57 AM No comments:

It's That Time Again

Well, It's that time again - a while since my last post and my Writer's Group is meeting and here I sit with nothing to show I have been doing any writing... and here's the conversation

Jenny, what have you written since we saw you last?

Well, I say "Would you believe the dog ate my homework?"

We are not buying that!, they reply.

But, I was on vacation and Don had a heart attack and we spent five days at St Thomas Heart Institute in Nashville while he had two stents in his heart.

Hey, give me a break I am still trying to remember part two of "What I Did Last Summer"

Okay, We will give you a break but for next month we will need 10 pages of new material, no excuses and because of the Christmas Holiday we won't meet until the second of January. Will that give you enough time?

Yes, yes, and yes, I promise to have something written by then....I have this little idea rattling my little pea brain

Now if I can just enlist the help of all my blogging friends to help to keep me on track until next year.

That's it for today
Posted by Jenny Johnson at 10:49 AM No comments: