Stories were a flyin' at the Dewey School Reunion as alumni gathered together for an afternoon of renewing old acquaintenances.  The oldest person attending being 91 years of ager and the youngest 67. 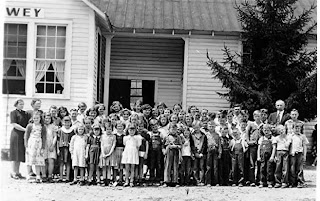 The earliest school anyone can recollect was built on the old Blaine Cole Farm in Doe Valley.  The students from Swift Hollow had to walk through a place called The Bee Cove - a distance of two to three miles.  Food for the whole family was carried  to school in an old lard bucket.   Lunch usually consisted of a ham biscuit or a piece of cornbread  spread with molasses.  The area was becoming more popular and a decision was made to build a new school in the Dewey Community.  It was named for the Community and was called the Dewey School.  The first Dewey School was up Swift Hollow and sat up on the bank about a quarter mile up the hollow from the main road (Highway 67).  It was used for years until one day the teacher made a couple of the boys mad.  They sneaked back to the school in the middle of the night and stuck some paper into a knothole in one of the boards and set it afire burning down the school.   The rest of that school year the Dewey School students had to walk to the Doe Valley School.  A new two room school was built and located at the corner of Highway 67 and Swift Hollow Road where the present day Dewey Christian Church stands.  As near as any one an remember it was built in 1935 or 1936 and continued in operation until 1952 when Doe School was built .  Several schools were consolidated to the new Doe School, Butler, Doeville, Doe Valley and Dewey.


The new school consisted of two rooms.  Both rooms were actually the same size but were known as the Big Room and the Little Room for the "big kids" and the "little kids".  There were four grades in each room.  Some grades had five or six students while others had two or three.  Heavy wooden doors separated the two rooms.  When there was something special going on the doors were pushed back into one big room.


Each room had its own small room we called a cloak room where we hung our coats and boots.  In the front there was also a kitchen where the school cooks, Ms. Winnie and Ms. Hazel  prepared our lunch.  There was no running water at the school so water had to be carried from the creek or from the well up on the main road.  A bucket full of water and a dipper sat on a small table and we all drank out of the same dipper.


The potbellied stove sat in the little room near the door.  When it was cold the teacher would gather the class full of students around the stove to do their lessons.  One day one of the boys threw a handful of firecrackers into the stove.  Pandemonium reigned until they all exploded and everything was settled back down.


There was a belfry with a big old bell which was rang by the principal when it was time to take up, recess, lunch and when school was over for the day.  I remember asking him once if I could ring the bell.  He told me if I did that I would be sucked up into the belfry and never come down.


There were no bathrooms.   There was an outhouse with a dirt floor on each side of the school - one for the boys and one for the girls.  It worked out just fine until one day we had a tornado touch down and destroyed the boys outhouse.  After that we had one common outhouse.


At the end of the day the boys would go to the coal shed to bring in the coal, wood, and kindling for the next day.  Others would shake the erasers against the side of the coal shed.  We girls had to sweep the oily dirty floor.


After sharing a meal, and doing some visiting class members shared their recollections of their time at Dewey School.


There were lots of "outhouse stories"  One class member remembered learning to smoke in the outhouse.  She related one of the older boys had a job working at Charlie's Grill.  He always had a little money and was able to buy tobacco and papers for "roll your own"  cigarettes.  He kept them in his coat pocket.  Some of the girls wanted to learn to smoke and would ask for permission to go to the outdoor toilet.  They would go to the cloakroom and wear his coat to the toilet thus giving them a chance to practice their smoking.  One lady told of the big turkey gobbler that lived close to the school.  That big ol' gobbler would chase her every time she went to the outhouse.


Another classmate stated school lunches in those days only cost 15 cents but he didn't have lunch money so he would run the quarter of mile or so to his Granny's because he knew she would have a big bowl of soupbeans and cornbread on the table.  He would hurry and eat and run all the way back to school so he would have time to play ball before the lunch hour was over.


Most of the students walked to school, one lady said, "we  lived back up in the holler-way back up in there and there wasn't another soul in that holler".   When it would snow someone would come with an old truck and break the snow so they would be able to walk out to school.  Another classmate remembered they would see her and her brothers coming down the road and invite them in to warm up by the stove before they continued their journey to school.  In the afternoons they would walk back the same way stopping to warm themselves before they walked on home.


One fellow told of walking to school every day and it was "uphill both ways".   Finally, one of the men in the community was able to get hold of an old panel truck that had benches along each side and the back.  The man driving the "bus"  would go up and down  each holler, Stout Holler, Shupetown, Pleasant Valley, Harbin Hill, and along the highway picking up kids.  Once in awhile some of the boys would get in a fight on the bus and the driver would stop and make them get off the bus and "fight it out right there"  in the middle of the road.  When they had settled their differences they would get back on the bus and continue on their way.  Children today don't know how lucky they are to have a bus come right to their door and take them to school.


Another classmate remembered when she was six she should have started school .  She said her dad would whip her and make her go.  She would cry all the way to school.  The little neighbor boy wasn't old enough to start yet and she didn't want to go to school without him.  After about three weeks of her crying every day she got to stay at home and the next year her and the neighbor boy went to school together.  They actually went all twelve years together, four at Dewey, four at Doe School and four at JCHS.


Another fellow told of being pushed into the icy cold creek in the middle of winter and how he had to sit all day with his wet britches on.  He said he could have walked home to get a dry pair but it wouldn't have mattered he would have had to wear them anyway since he only owned one pair of britches.


Fond memories of the teachers were remembered, among  them John A.. Shoun, R. Clyde Wilson, Ms. Hazel Wilson, Mrs. Rena Shoun, Madge Nave, who taught there in the forties, Haggai Miller (pronounced Hagy-I) and others.


Our cook Ms. Winnie Wilson, was remembered for her scrumptious peanut butter cookies and her big bowls of soup on Friday.  Someone else remembered her carrying water to cook with and how she fed us like kings.  One of the girls didn't like to drink milk so Ms. Winnie would give her chocolate milk to drink.


Someone told of how  teacher, Haggai Miller used to have a saying he always said,   "Idleness always causes trouble", which still stands true today.  Another told of how Haggai used to send him to get a willow switch  to whip him with.  He came back with a small switch so Haggai sent his good friend out to get a switch. The friend came back with a willow switch about six feet long.  He said by the time the teacher got through whipping him it was just a little stick.


Memories of Mrs. Rena Shoun were told and how she spoiled us.  One man related when we had to move from the two room school to the big consolidated Doe School upon the hill he was in the third grade.  He said he thought he had quit school and gone straight to the penitentiary.  “The teacher paddled me  every day”, he said.  “I thought she was the meanest teacher that ever walked the face of the earth”.  It was an adjustment for all of us going from the small school to the new Doe School.  It was not only was a much bigger school,  there was a room for every grade and lots of kids we had never seen before.  We had drinking fountains and toilets that flushed.  There were showers in the bathrooms, most of us had never seen a shower before.  There was no bell to ring and no erasers to dust and no more going to the outhouse.


At the end of the reunion many of the members sported new Tee shirts designed by classmate Charles Winstead of Griffin Georgia.
It was a spectacular fall day, with lots of food, laughs, fun and fellowship.  The memories of that little two room school will forever be etched in our minds. 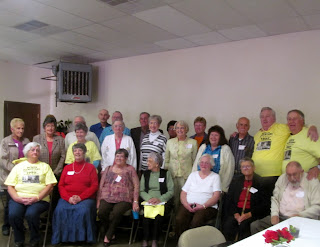 The next reunion will be held in October 2014.