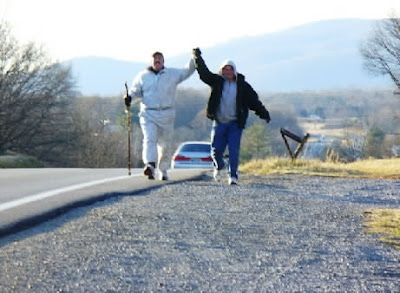 Well, As of today Scott has completed 230 miles of his walk. Today he will complete the portion from Appomattox VA to Buckingham, VA. A lot of our ancestors came from Buckingham so he should be in fine company there. He is still gaining lots of support from across the entire country. Way to go Scott!! You are on the downhill slide now.

It is kinda quiet here this morning so I thought I would give you some interesting facts you might want to know.


In the 1400's a law was set forth in England that a man was allowed to beat his wife with a stick no thicker than his thumb. Hence we have 'the rule of thumb'


Many years ago in Scotland , a new game was invented. It was ruled 'Gentlemen Only...Ladies Forbidden'.. .and thus, the word GOLF entered into the English language.


The first couple to be shown in bed together on prime time TV was Fred and Wilma Flintstone.


Every day more money is printed for Monopoly than the U.S. Treasury.

Men can read smaller print than women can; women can hear better.

It is impossible to lick your elbow.


The State with the highest percentage of people who walk to work: Alaska

The average number of people airborne over the U.S. in any given hour: 61,000


Intelligent people have more zinc and copper in their hair..


The first novel ever written on a typewriter, Tom Sawyer.


Each king in a deck of playing cards represents a great king from history:

You were interested in knowing all that -- weren't you? I will be back tomorrow with something else.

One other thing I wanted to mention... I would like to send lots of Get Well Wishes to my sister in law Emogene who is having major surgery today. Thoughts and prayers are coming your way.

For those of you who want to follow Scott's journey his daily walk to the steps of the U. S. Capitol here is the link http://www.tencommandmentswalk.com/

You can leave comments on this page or if you prefer to contact me you can do so at kimilauri@msn.com. If you have memories you would care to share about living in Johnson County I would appreciate it if you would share those also.

Cool Jenny, interesting stuff to know. You left chat last night and we had a question for you.. Why are two pony tails called pigtails?? I figured that is something you would know?
Will keep your sil in my prayers.

JJ I am back on line and read your journal ans as usual I enjoyed it.Thanks for the information

Those were fun facts, thanks for making me a little smarter! :-D