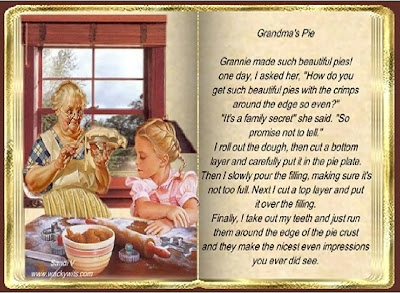 Well, No matter what she did during the week , on any Saturday afternoon you would find my grandma in the kitchen baking pies. We always had pie for Sunday dinner and supper. She would go into the mealbox, drag out her dough board and rolling pin, reach under the table for the can of lard, grab the bowl she used to mix the biscuits in and in no time flat she would have 8 or 10 pie shells ready for filling. She had two fluted pie pans. She would bake the shells for the pudding pies and then the fruit pies or double crusted pies last. As soon as the pie crust was done she would put it on a plate so she could use the pan again.

Sometimes it was chocolate, sometimes butterscotch, sometimes custard or coconut and always 3 or 4 apple pies. She didn't need a recipe book she had all these recipes in her head. Fillings were always made from scratch. It was a pinch of this and a pinch of that. Heck she didn't even own a measuring spoon and only had one measuring cup we got out of the box of oatmeal.

She never used whipped cream for her pies. The cream was skimmed from the milk to make butter, butter milk, and cottage cheese so we never had any left for pies. Instead if she needed a topping on her pies such as chocolate or coconut she would make a merringue and then put it in the oven to brown before she took it out of the pan.

Apple pies were always two crusted. She would take her knife and make an S on the pie and holes next to the S. I always thought it was for decoration but actually it was to vent the pie to prevent it from bubbling over. She made her own filling for the apple pies. The smell of cinnamon and cloves would fill the kitchen with the most wonderful scent.
Sometimes she would make blackerry pies from blackberries we had picked in the summer and she had canned. Getting the blackerry filling thick enough was always a trick and if by chance it was a little runny, she always aplogized, blamed it on either the stove or the weather and we ate them anyway. They were always delicious.
In the fall and early winter, when the pumpkins were plentiful we could expect lots of pumpkin pies. For a special occasion we might have a lemon pie.
If she didn't plan on making but two or three pies on Saturday. She would make a big old stack cake with about seven or eight layers and filling in between. Making Stack Cakes was an art. I will write about those in a separate story.
On another note, Here is a memory I recieved from one of my friends about her Grandmom.

I REMEMBERED SOMETHING ABOUT MY GRANDMOTHER, BUT I BET YOU REMEMBER IT ALSO.. MY GRANDMOM ALWAYS WORE AN APRON, EVERY DAY, ALL DAY LONG. AND ALWAYS HUNG IT UP BEHIND THE KITCHEN DOOR EVERY NIGHT IF IT WAS CLEAN ENOUGH TO WEAR THE NEXT DAY.

I do remember her apron but my favorite memory of her Grandmom was of the big ktchen table loaded with food and the sideboard full of freshly baked pies. I also remember the time Jean and I got into trouble for picking the neighbors tomatoes and hiding them under our bed so we could eat them later. Our punishment from Grandmom was we had to go raid the neighbor's garden again so we would have enough tomatoes for all of us to eat.

That's It for Today.

Posted by Jenny Johnson at 5:27 AM

Oh, yum!! I love to make pies, too. Especially with fresh fruit in the summer, like huckleberries and raspberries, and strawberry rhubarb. My mouth is watering just thinking about it.

And a very fitting punishment it was !!

What I want to know Jenny...did you learn how to do all this good baking?? And if so do you bake and cook like she did.

How neat..Sounds so yummy. What a wonderful childhood memory to have.

I have many fond memories of my grandmother and many revolve around her wonderful 'from scratch' cooking. Her desert specialty was home made Cherry Cobbler!