Well, I feel really old today....my favorite niece is having a milestone birthday--Happy Birthday Pam!! She is a very young 50 years old. Isn't she pretty? 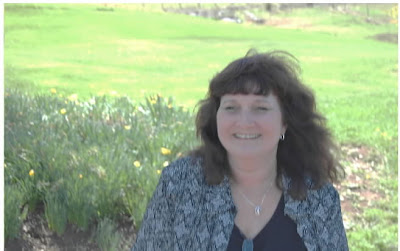 She was born in 1959 in the second story clinic of Doc Bundy in Mountain City. In the “olden” days babies were delivered at home mostly by midwives. If a midwife was not available then the doctor was called and he delivered the baby at home. As far as I can remember, she was the first baby I had ever known that was not born at home and attended by a midwife

Doc Bundy had come from Lebanon,VA and set up a medical practice in Mountain City in 1946. The closest hospital was 30-40 miles away so he set up a 4 bed clinic. He had 4 round the clock nurses, Kate, Annis, Dorothy and Bea. He continued practicing until 1973 when he passed away.

Pam's mother says it was a rainy cool day when she was born at 12:30 PM and weighed 8 pounds and 4 ounces. My brother (Pam’s dad) was going to an electrician’s trade school near Abingdon. On the day Pam was born he snuck off from school and came home early. He was so proud.

Her mom says she was a good baby and she never had one ounce of trouble with her. Of course, my sisters and I thought it was a great thing to be an aunt. I remember my sister and I going to Blackburn’s and buying her a little white lamb. We each chipped in a quarter. The price of the lamb was fifty cents.

Here are some other things that happened in 1959. Enjoy these Pam, and remember you will always be as old as the Barbie Doll and Mr. Potato Head.

And some perks of being 50

26. No one expects you to run into a burning building.
27. People call at 9 PM and ask, “Did I wake you?”
28. People no longer view you as a hypochondriac.
29. There is nothing left to learn the hard way.
30. You can eat dinner at 4 PM.
31. You have a party and the neighbors don’t even realize it.
32. You no longer think of speed limits as a challenge.
33. You quit trying to hold your stomach in, no matter who walks into the room.
34. You sing along with elevator music.
35. Your eyes won’t get much worse.
36. Your investment in health insurance is finally beginning to pay off.
37. Your joints are more accurate meteorologist than the national weather service.
38. Your secrets are safe with your friends because they can’t remember them either

And some Sage Advice

39. Regrets are the natural property of gray hairs
40. There is no cure for the common birthday
41. The older the fiddler, the sweeter the tune.~ English Proverb
42. Old age is like flying through a storm. Once you’re aboard, there’s nothing you can do.~ Golda Meir
43. You are as young as your faith, as old as your doubt; as young as your self- confidence, as old as your fear; as young as your hope, as old as your despair. ~Douglas MacArthur
44. Age is an issue of mind over matter. If you don’t mind, it doesn’t matter. ~Mark Twain
45. Age does not diminish the extreme disappointment of having a scoop of ice cream fall from the cone
46. How old would you be if you didn’t know how old you were? ~Satchel Paige
47. The more sand has escaped from the hourglass of our life, the clearer we should see through it. ~Jean Paul
48. Age is not a destination. It's a journey!
49. Few women admit their age. Few men act theirs.
50. Do not regret growing older. It is a privilege denied to many ~Anonymous

and here is a photo of Pam and her children, Jesse and Abby 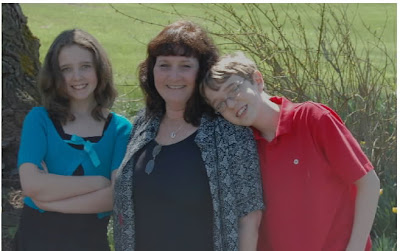 And a photo of her birthday cake made by the kids. How Special!!!! 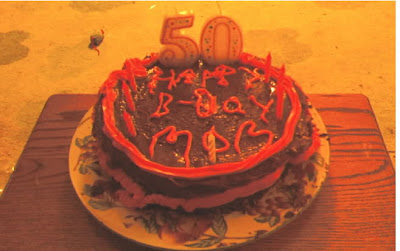 Here's wishing you a great birthday Pam and as your Grandpa Roy would say "That's it for Today".

Posted by Jenny Johnson at 7:43 AM

My little sister will be 50 this year too! It's hard to imagine!

Thanks Auntie Jen! Really proud to see my "beautiful babies" and my cake on there too! Jesse ok'd the project but I have to give credit to Abby-she made the cake. I am blessed to still have family like you, great parents and brother, and two really great kids. I have a lot to be thankful for today.
Love ya,
Pam

Gee, I just realized that my middle child, daughter Wendy, has just turned 47, and my oldest son, Peter, is 52!! Boy! That makes me old, but I don't feel it.
Happy Trails, Penny, TX