Well a couple days ago I was talking with Deb from Keeping Up With The Kendalls. Deb and Rod are in Southern Idaho and have been making weekly trips to Yellowstone looking for animals. Specifically they are looking for a moose. So far they have not had any luck. So Deb this blog's for you.

My brother in law, Harold is a hunter. Coon, Rabbit, Turkey, you name it he will hunt it. Harold lives in Tennessee. He grew up and spent his life hunting in the mountains of east Tennessee He has also taught his grandsons to hunt. They are great hunters.

Harold is an avid bear hunter. He has been on bear hunts as far away as the Coast of North Carolina, South Carolina and even up to Canada. He also holds the State Record for the largest bear ever killed in the State of Tennessee.

This bear was shot by my great nephew Josh when he was eight years old. 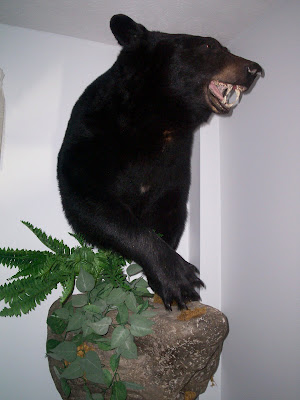 My great nephew Ethan shot this one when he was eleven. 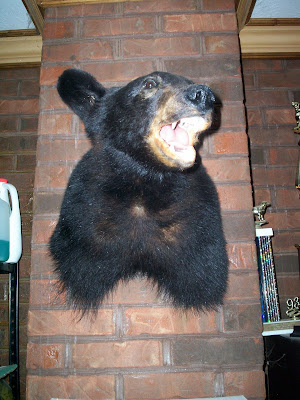 And this is the biggest bear ever killed in the state of Tennessee. It weighed 635 pounds and was shot once with a 44 Magnum Pistol. It was shot on Iron Mountain, Johnson County, TN.

On the bearskin rug is my great grand nephew, Matt. 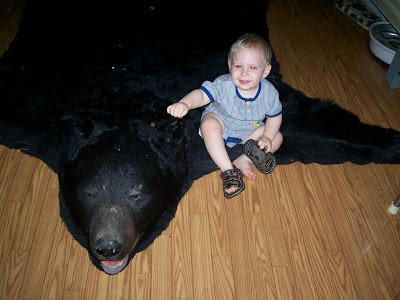 Now that is a true bear story. If you want a fish story -- I can tell you one of those but I doubt if you'd believe it.

That's it for Today.

Posted by Jenny Johnson at 3:24 PM

I would believe it JJ

Thanks for the blog, Jenny. WOW!! What else is there to say?? Well, we're off again today to look for the elusive Yellowstone animals. Wish us luck.

Welcome to the Tiffin Motorhome Family!!! It has been a while since I was able to get online, when I looked at your "older" posts I was shocked!!! You have a rare jewel there in your "new" Allegro! Congratulations!