Twice Around The Kettle - Once Across The Middle 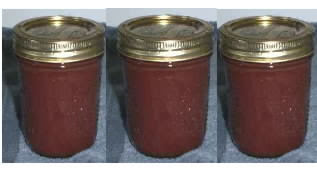 When I was growing up the beginning of fall meant apple butter making time. We had a big copper kettle that was used for making the apple butter. A few days before the actual making began we would begin gathering apples. We had lots of apple trees but the one that made the best butter was one we called the Pound Apple Tree. It was a huge tree and always produced these huge apples. Many of them were at least a pound or so thus the name. That old tree still stands today and stil produces apples. I snapped these photos this fall some fifty years later. 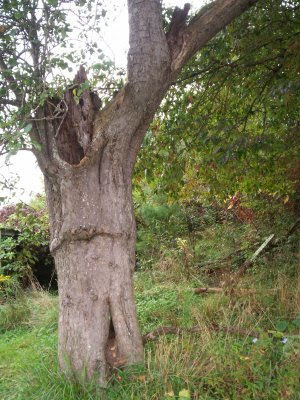 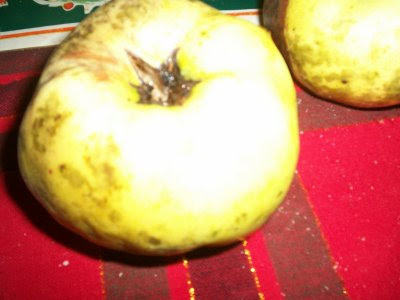 It was our chore to go to gather the apples on the ground every day but when we were ready to start the butter we would take the ladder and shake the tree picking up all the apples that fell to the ground. We would have six or seven bushels of apples and then it was time to start peeling and coring. We would sit in the shade of the porch and peel and cut apples. We saved the peelings to make apple jelly and the core was thrown away. We would have a big washtub full of fruit ready for making the next day. We would then set up the kettle .

We used a metal stand with three legs to support the kettle and keep it about a foot from the fire. We had an apple butter stick that was used to stir the apples. The stick or stirrer as it was called was about 4 inches across and about as deep as the kettle. The bottom was rounded to fit the contour of the kettle so you could keep the sides from burning. It had a handle about 6 feet or so that kept you away from the fire. 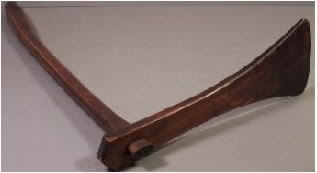 The actual process took all day usually about eight hours or so. Early in the morning we would fill the copper kettle with apples cover it with water and build a fire underneath. It was important to begin the stirring process as soon as the fire was built. It was tough stirring to begin with but it was necessary to keep the apples from sticking. Once the kettle warmed and the apples began cooking it got easier. Everyone took their turn at stirring. It was kind of a neighborhood event. The neighbors would stop by to visit and they took their turn too.

It is hard to pass a boiling kettle of apple butter without taking your turn. 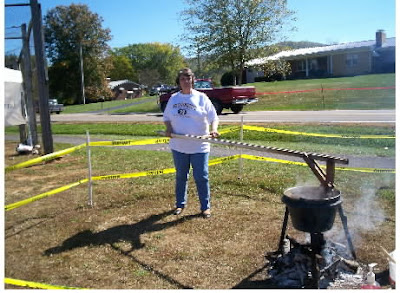 After the apples have turned to sauce we added apples and water until all the cut apples were gone. At this point it is necessary to keep the fire steady and the stirrer continuously moving to prevent scorching. When all the apples are cooked into a fine sauce it is time to add the sugar. After the sugar has been added the last step was to add about a cup of cinnamon and a cup of sugar and some whole cloves. Continue to cook for awhile and then it is time to begin the tasting process. You want the taste to be a little sweeter than normal because after it cools it mellows out a little and is not quite so sweet. Keep on stirrin' and keep on tastin'. When it has turned a deep reddish brown and isn't watery anymore it is done. It was then ladled into clean jars and sealed left to cool overnight before it's final step to the cellar.

While the apple butter process was going on outside, inside the apple peelings were simmering on the wood stove. When all the juice was cooked out of the apples they were then squeezed through a white cloth and sugar was added to make the jelly.

Our kitchen table always held a jar of apple butter or jelly sometimes both. There is nothing better than eatin' a hot biscuit slathered with butter and apple butter. It made all the hard work worthwhile. 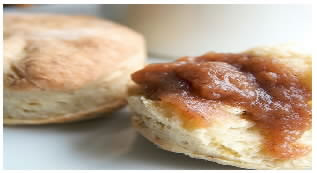 That's it for today.
Posted by Jenny Johnson at 8:09 AM

Yum!!! What a great story. I love the whole process you went through. I made apple butter one year when we lived down in Meridian, Idaho, and had apple trees. It was a fun process, and it was delicious. I can smell those apples cooking now!!!

JJ that sounds so good. I guess it was a lot of work but the end results were well worth it?? I like apple butter but did not have a clue on how it was made...now I know thanks to my friend Jenny J

Hey JJ- That's pretty cool! I had no idea it was made that way!!