Well, it seems my readers are liking my stories about growing up in East Tennessee so I thought I would share another story with you about my Grandmother. Here she is pictured in front of her garden 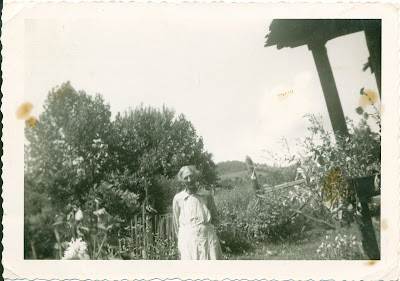 Growing up in East Tennessee, most of the food we ate came from the kitchen garden. We always had plenty to eat. The garden was located just outside the back door, very handy to the kitchen.

As soon as the snow was gone in the spring we would begin preparing the garden. During the winter the cornstalks were dumped on the garden after the corn was shucked. Ashes from the wood stove had been dumped into the garden. One corner of the garden was dug up and used to plant tobacco seeds for when we were ready to transplant them to the field. In the end of the tobacco bed would be planted lettuce.

The garden was planted the same way every year. We had peas, onions, lettuce, carrots, beets, cabbage, swiss chard or turnips, beans, potatoes, corn, cucumbers, tomatoes. When the peas came off we dug them up and planted more beans. At the end of the garden we grew horseradish, on the side there was rhubarb. We always planted two rows of peas and two rows of onions We planted different varieties of beans. We had half runners and cornfield beans were planted in between the corn, their vines grew tall and wrapped around the cornstalks and were great to pickle along with the corn. We also raised pole beans. A makeshift trellis was set up in the garden using pieces of lumber and twine string. Those pole beans just grew up the string. It was easy to pick them because you could stand up. Pinto beans and October beans or shellies were planted with sweet potatoes after the tobacco bed was harvested.

The first year we had electricity was 1951. It was determined that our electric pole would be placed in the edge of the garden. My grandmother had just planted her garden and the peas were beginning to sprout through the black dirt. I remember my grandmother being so worried that the men from the REA (Mountain Electric) would stomp on all her peas and we would not have any peas to eat. As luck would have it, those men dug the hole, placed the pole in the ground and strung the wire , all without a footprint in Grandma’s garden. She was so proud.

My Grandma had a big garden for years. I will always remember the sweet taste of the tomatoes right off the vine and warm from the sun. MMMMM Good!

JJ I was too young to remember our garden in Childress Texas. I heard some funny stories about it however. When we share the porch in March I will tell you those stories. Sherri and I love your journal. You really should put these in chapters in book form and save them for your G-Kids. That would be a great hand me down gift for them. It is good to know about your family in that way.

My Grandma also came from the Tennesee/Kentucky area. When I was growing up she lived in Spokane, and had a wonderful garden every year. I can still smell the fresh green beans and bacon cooking on her stove. I can also remember the smells of my other Grandma's garden who lived in Orofino. Her tomatoes were the best!!!