One of the most interesting things I discovered was Bisquick was invented in 1931. Advertising told consumers, "It makes anyone a perfect biscuit maker". I beg to differ with that theory. I have never been able to make a biscuit that was edible from any kind of mix or any type of flour. My biscuits are made from that little round can I pop on the counter and put into a pan. My father hated store bought biscuits but he kenw he would have to endure them when he came to my house. Once, my mother had come to visit and while she was there she baked a great pan of biscuits. There were leftovers and I put some of them in the freezer. When my father came to visit I took the biscuits out, heated them up and put them on the table. My father made the remark, that I was doing very well at biscuit making. My biscuits were almost as good as my mother's. I never told him any different.

Probably one of the most important things that happened in 1932 ws the birth of my brother, My brother was born June 22, 1932. My adopted brother (first cousin) was born June 21,1932. Here is a picture when they were small boys. 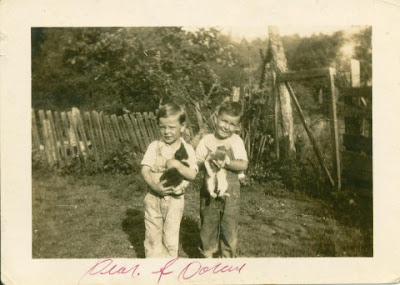 For years they have always celebrated their birthdays together. Last year was no exception. Here is a picture on their 75th birthday. It goes to prove they still like to hang around with "cute kittens". 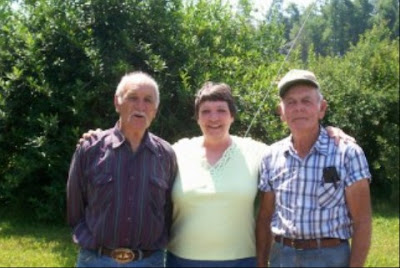 Other pieces of information I found was:

Gone With The Wind was a big hit. It won many awards and was voted The Best Movie of The Year. Even today it is watched by millions of people every year.

The Jitterbug was a popular dance in the thirties.

The population of the world was two billion.

The Hostess Twinkie was invented.

Great depression: US President Herbert Hoover goes before Congress and asks for a US$150 million public works program to help generate jobs and stimulate the economy.

This is a good place to stop. In the words of my father, "That's it For Today".
Posted by Jenny Johnson at 8:41 PM

Very good history lesson. Pictures were great, but I don't know about the last picture being a kitten more like a shecat. Keep blog going, enjoy reading.