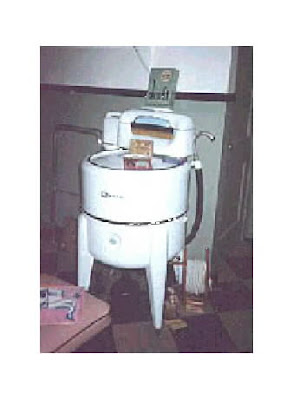 Well, I found this picture of an old washing machine it reminded me of the first electric washing machine we had. When we got electricity it was determined one of these newfangled (RK) machines would make life a lot easier.

Before we got electricity we did our wash out next to the creek bank using our iron pot for heating wash water and two galvanized wash tubs and a wash stand with an old wringer in the middle. A washboard was used to scrub the clothes clean.

Our first and only washer similar to the picture was a used one that my grandfather paid 10 dollars for at J.C. Muse Hardware Store. It sat in a corner of the back porch next to the kitchen door.

The hot water would be dumped into the washing machine. The white clothes were always washed first. Bluinig was added to the water to keeep the clothes white. Then the bed sheets and then colored clothes, towels, and then overalls and rags last. By this time the water was really dirty.

Things that were to be starched were added to the dishpan full of starch water and starched before they were hung to dry.

We had just one clothesline and by the time it was full. The first clothes were usually dry. We could take them down and hang others in their place. After the washing was done the dirty water was carried out to the back and dumped under the house. I never knew why they did that except it was close. The cleanest dirty water was then used to scrub the back porch. The boards of the floor weren’t real close together so the water would seep down through the cracks and disappear.

After the clothes were dry and brought into the house they were either folded and put away or wet down so they could be ironed. Ironing was a different story . It was hard work. I will write about that later.

That’s it for today.
A post script to this story .

We also had another use for the washing machine lid. In the wintertime we used it for a sled. It made a great sled as we went flying down the hill on our homemade saucer.
Posted by Jenny Johnson at 8:04 AM

My Nana had that same washer all her life. When the old one finally gave up the ghost around 1974, dad and mom wanted to get her an automatic. She would have no parts of it and they had to hunt all over New England for a "ne" wringer washer. When My aunt moved in about 5 years later to take care of nan the first thing that went was the washer!

Oh, Jenny, I had one similar to that in the 60's in England, but it didn't have a wringer. It had 3foot pedals. One made the soapy water spin into another water storage place underneath it. Another pedal for retrieving the water into the tub, to use it for the next load, and another to make it agitate. To rinse, one had to do the same process all over again.
Boy, did I think that I was "Up Town", even there in the British countryside, outside Newmarket, England.

Wowee Jenny you really brought up a memory here for me.
My grandma was forever reminding me that one of her 11 kids once got hurt on the wringer, so I couldn't touch it til I was old enough to be careful. We scrubbed the porch, same as you did. I had the job of getting clothes after they were dry, and got stung by some bees hiding in the sheets
a few times. In winter we washed in the kitchen and the clothes would freeze on the line, then they were brought in to dry by the wood stove.


By the way I will be travelling to Sedro Wolley in June. My aunt lives there and she thinking of moving to TX since she will never fly again (it's a long story there)so if she really does make the move we will be riding the train back to TX.