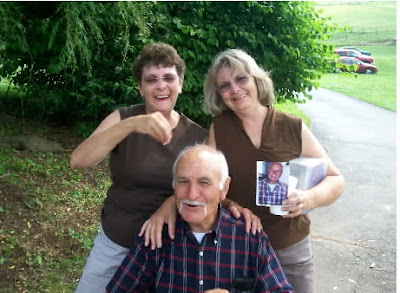 Well, today is the day my twin sisters celebrate their 59th birthday. They are a lot older than their 24 year old sister. Here they are with my older brother Doran on his birthday. Fae has always been the prankster in the bunch. She is dripping cold water on his head.
Here are some things that happened in 1950 the year they were born. Actually it was not long ago.

The United States decides to send troops to fight in the Korean War.
In 1950, the first modern credit card was introduced.
The first commercial drag strip, the Santa Ana Drags, begins at Orange County Airport (now John Wayne Airport) at Santa Ana, in Southern California, United States. Admission wss 50 cents; or 75 cents if the ticket holder wanted to watch the mechanics work.
At Sears, a red “Radio Flyer” wagon cost eight dollars and seventy-five cents
Milk cost eighty-two cents, gas was twenty cents, and a postage stamp cost three cents.
Six bottles of Coca-Cola cost thirty-seven cents.
A cheap Timex watch costs about $15 - you have to wind it.
Birth control pills are not yet available to general public.
It was a different world and more simple. People seemed less insulated and we hadn't yet lost contact with our extended families (most of your relatives lived within easy distance by car and you kept in contact with them). People helped strangers and you could generally walk through smaller towns at night in complete safety. Many people did not lock their doors.
That should give you a good start of things to think about.

The comic strip Peanuts by Charles M. Schulz is first published in seven US newspapers.

Happy Birthday Mae and Faye. You can safely say "You're as old as Peanuts"!!!
That's it for today.
Posted by Jenny Johnson at 5:38 AM

Thanks,from both of us. I was so happy, that we was together on our B-Day.