Well, after one more trip to Walmart, a scrumptious dinner at Big Daddy's (flounder, shrimp, oysters and all the crab claws I could hold) we settled in with anticipation of a great road trip on Saturday.

"Pa" (Darrell) and Judy had offered to take us to show us some sights since they are the "old timers" around here. A little after tennish they picked us up and we were off to the big town of Foley Alabama. On the way they pointed out spots of interest like the post office, library, grocery, oh and WALMART!! They didn't want Don to be wandering out in the country again. Oh, I must have forgotten to mention that--well I will let him tell you about it.

Entering the town of Foley we arrived at the Alabama Model Railroad Museum. It seems that an elderly gentleman had began the model railroad and donated it to the city. In giving it to the City, he asked that the exhibit be available for children and that there be no entrance fee. The Caboose Club of Foley set it up in the old L & N Railroad Depot. The exhibit is 24' X 60' and has a quarter mile of track. It has 3 operating double track routes and 12 different railroads represented. It is set in the 1950's era, when the rail lines were in the transition of being run by steam to running on diesel fuel. 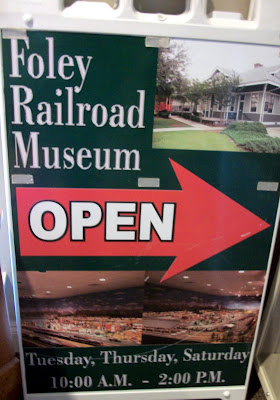 Some of the displays were an old town carnival, with a moving ferris wheel and a circus. There was a drive in theatre which continually showed a movie, a fire station with fire trucks that went racing to a fire, a fast food drive in where a 1957 chevy came driving up, the car hop came out and took the order, went back inside and brought out the food. "A hamburger, french fries and a milkshake, that will be a dollar and fifteen cents sir". You don't get that kind of service anymore. 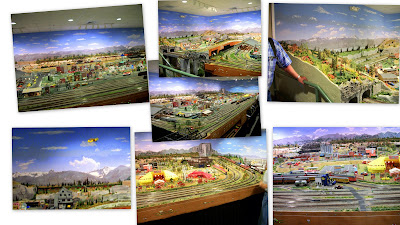 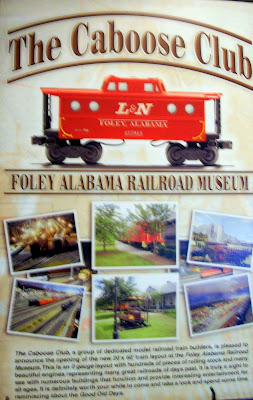 "Pa" says they are continually adding new displays and he always sees something he didn't see before. He pointed out the airplane flying overhead and even knew the kind....me I just knew it was a yellow one! There were so many displays it was hard to see them all, there was a still up in the hills, some hoboes complete with a campfire camping next to the river, there was a lake with boats and people fishing and even a couple guys repainting the bridge. I could have stayed there a half day just looking and watching the trains go by. It was evident that a lot of work has gone into this free museum. If you are ever in the area you might want to put this on your list of "places to go".

After the museum, we were a little thirsty so off to Staceys Drugstore we went. From the minute you step in the door it takes you back in time. The old jukebox playing the tunes of the fifties, ten cents a play or three for a quarter-- to the old time coke box, not to mention the soda "jerks" and limited lunch menu--it reminded me of the old Courtesy Drug back home. It even had a scale where you could get your weight and fortune for a penny. Now I haven't done that in a long time. Don and I had an excellent milkshake while Pa and Ms Judy had a sundae...while there we met another couple of brand new RVers and were able to tell them about Escapees and Rainbow Plantation. 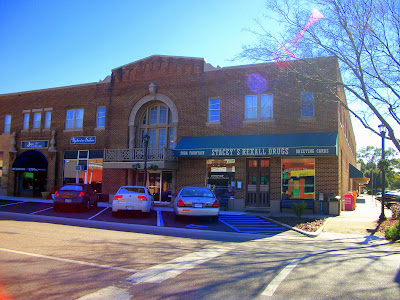 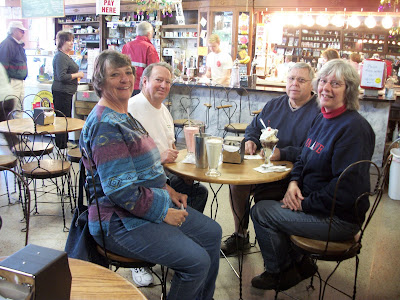 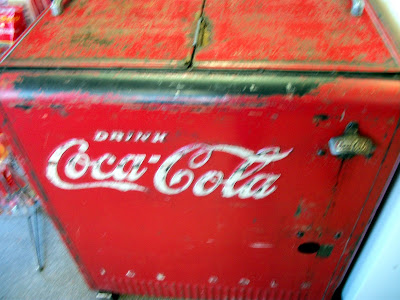 The street corners and sidewalks are planted with beautiful flowers 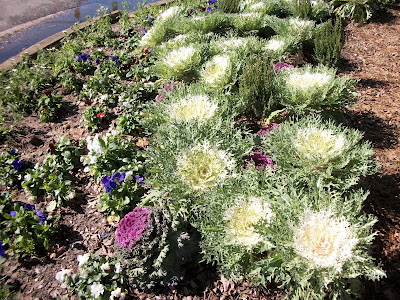 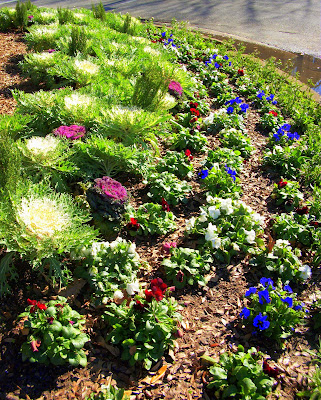 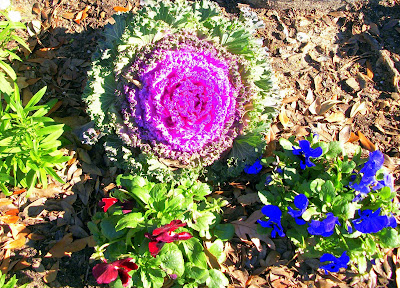 Back in the truck we went on a little tour of Baldwin County by heading south from Foley, west to Bon Secor, and North to Magnolia Springs. On our way we stopped by Point Clear at Punta Clara Kitchens. Now this was the place to be! A family owned business for three generations We ate our way through chocolate covered pecans, pralines, cheese straws of different sorts, jams and jellies, and even just plain pecans. Another place you won't want to miss. I was so busy eating and looking I forgot to take a photobut here are photos of the area. 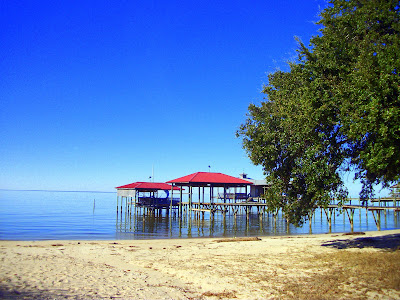 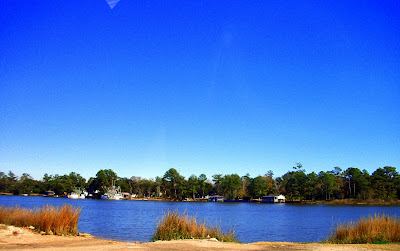 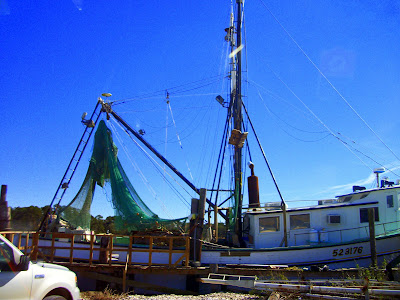 From Point Clear we made our way to Fairhope where we strolled out onto the community pier. Judy and I walked clear to the end of the pier while Don and "Pa" opted to stop and watch a fisherman using a net to catch fish. I would classify this as "no bait fishing" since he just threw the net over the side of the pier, pulled it up and caught whatever was in it---I was glad it wasn't a whale or an alligator of some kind. He was catching what he said was mullet...sometimes six or seven at a time. In no time flat he had a five gallon bucket full which he planned to smoke....Pa wondered how you smoke a fish...I don't know about Alabama but I can tell you they smoke whitefish in Montana and Blueback in Idaho.
Looking across the bay at Mobile Alabama 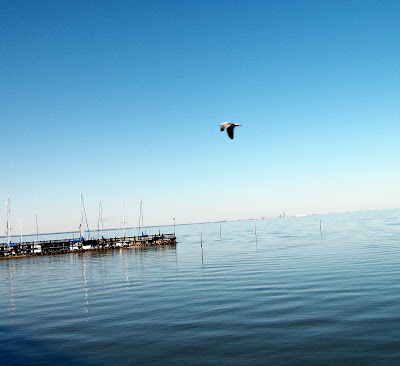 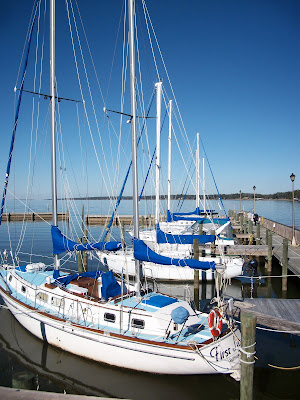 Casting out the net 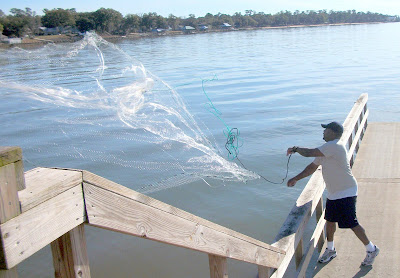 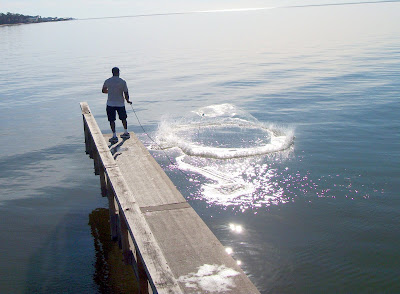 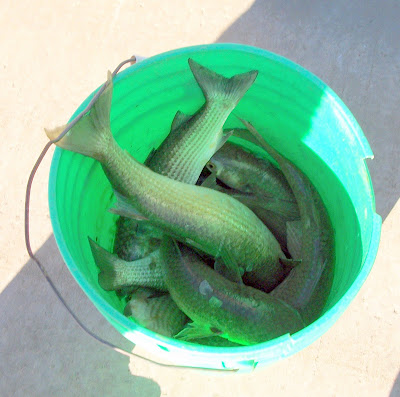 After all this excitement it was time to head for the "Plantation" and our respective homes. Thank you "Pa" and Ms Judy for a funfilled day and for squiring us around.....it is wonderful to see some of the area and great to be able to spend some time with good friends like you. 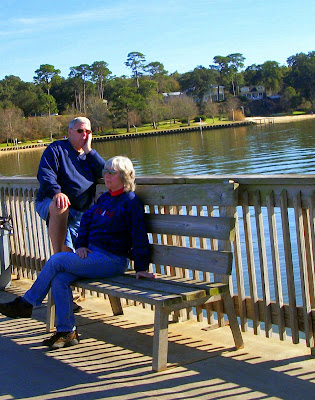 From "The Plantation" that's it for today.


Note from Don:
My wife mentioned my wandering out and about in the country but she failed to mention that it was my "GPS Jenny" which caused me to take a wrong turn that did not lead me where I wanted to go or needed to be. That darn GPS has a nose that can seek out any Walmart and after getting her bearings and following Darrell's well written instrutions we were home shortly. We had a wonderful day today being escorted around with no chance of being lost. Thanks Darrell and Judy for a excellent day.
Posted by Jenny Johnson at 6:44 AM

I think that beautiful flower is a flowering kale. They come in white and purple. Great photos today.