Well, it was a laid back Sunday around here. We were up early and off to church. Heard another great message from God's word. After church it was off to Walmart for a few provisions. Back home for a nap and then off to the International Dinner at the Clubhouse...now that was a great meal. Some of the ladies in the park had volunteered to cook their favorite international dish, there was just about everything you could think of. For a three dollar donation you could taste anything you wanted. Proceeds from the dinner went to Escapees CARE and over $350.00 was raised. It was a good time. We were entertained by "The Chenilles", another group of ladies who love to entertain....that also was great... I don't have any photos but I "borrowed" a couple --thanks TG 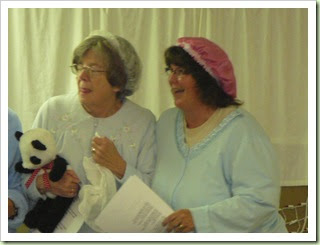 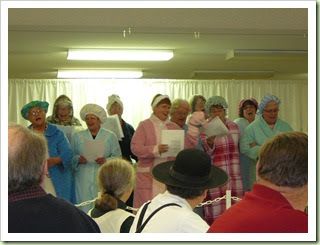 After dinner we went back to evening church service, came home and called it a night.

It seems that a lot of people around here have had bouts with colds that won't go away. Here's a few old fashioned tips on how to cure the common cold.

Sometimes you manage to catch a nasty common cold. You know the kind. Your head feels as big as a foot ball, you have sniffles and sneezes, chills and sweats, a sore throat, and an annoying cough. You feel achy all over and you think you would be better off dead.
My grandmother was a midwife and believed in a lot of herbs and medicines and had a cure for everything - even the common cold. She used Mullein tea for bronchitis, a mustard plaster for congestion, or a clove or two of garlic crushed and stirred into some warm milk. Now that may not cure your cold but it will sure scare the heck out of one.
To cure the sore throat you had to gargle with salt water and she always told me "drink a little bit, it'll help". A tall glass of liniment was always in order too. That'll stop your cough. We had this couple who used to come around about once a month selling Raleigh products . There was always a bottle of this liniment in the cupboard. Any time you got sick you were made to drink this vile tasting stuff. There was two kinds of liniment "the drinking kind" and "the rubbing kind" which was used for aches and pains. It must have worked because it is still on the market today.
Camphorated salve was another cure, my grandmother would grease my chest, the bottoms of my feet, dress me in my flannel nightgown and into bed underneath the big featherbed I would go. I dont know if it was the salve, the flannel or the heat but it always cured me.
An asafaetida bag was sometimes tied around your neck to get rid of your cold....I don't know how it worked to get rid of your cold but I know you couldn't give your cold to anyone else...it stunk so bad no one would even come close to you!!

Since Chicken Soup is the best known remedy for a cold so I thought I would share my recipe with you.

Saute the onion, garlic, celery, carrots and onion in a large pan with a little bit of oil until the vgetables are limp. Add Chicken stock, chicken, salt and pepper and noodles. Simmer 30 to 45 minutes.

Here's a little bit of humor for you.

A man went to see his doctor because he was suffering from a miserable cold. His doctor prescribed some pills, but they didn't help.
On his next visit the doctor gave him a shot, but that didn't do any good.
On his third visit the doctor told the man to go home and take a hot bath. As soon as he was finished bathing he was to throw open all the windows and stands in the draft.
"But doc," protested the patient, "if I do that, I'll get pneumonia."
"I know," said his physician. "I can cure pneumonia."

And in the words of my father, "That's it for today!"

Posted by Jenny Johnson at 6:32 AM

I just read your story about hunkering down and boy did it bring back memories of staying over at my grandparents farm in Pennsylvania in the winter. Thanks for that. It has been a while since I have read your blog, but it seems like things have changed for you. Are you married now? Do you no longer live in Washington? Do you no longer have your old RV?
Gene S.

I added myself to follow your blog. You are more than welcome to visit mine and become a follower if you want to.

Miss your posts. Hope everything is ok and going well on your adventure..