Well, as of Saturday night the fire that started Thursday afternoon is about 60 percent contained. Almost 350 firefighters from across the state were called in to fight the blaze. From what the news media has said it started from a backyard pit that got out of control. There are at least seven other fires burning out of control in Washington State. The largest is the Badger Complex fire near Wenatchee. It has burned over 13,000 acres.

Other news from Spokane last week was the arrival of Fellowship Tours out of Gray, Tennessee. They were on a 16 day tour of the Pacific Northwest. Fellowship Tours is owned by Doug and Margaret and he is the driver and she is the tour guide on this particular trip. When I was in Tennessee I found out one of my friends and one of my relatives would be on the tour so I wanted to suprise them when they stopped in Spokane to spend the night.

After checking to find the time of their arrival I showed up at the hotel as a surprise. Unfortunately, when I got there they were ahead of schedule and had already arrived. I went in search of my friend and relative. They were really surprised to see me and we had a nice visit.

Doug and Margaret were also surprised to see me. I can't imagine why. They see me almost every year. My sister, June, travels with them a lot. She has taken this particular trip three times as well as trips to the Amish Country, Key West Florida, Niagra Falls, The Southwest, and a mystery trip this year where she went as far west as San Antonio Texas. She loves the guided tours. She and I took one to Nashville to the Grand Ole Opry. It was a lot of fun. We may take a trip together next year.

Here is a picture of June and me in Spokane last year when she was on the Pacific Northwest Tour. 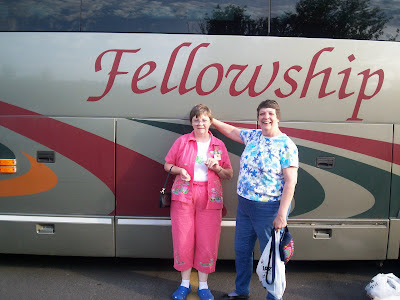 They liked the sign I made for them. As Doug said, "You don't always get a Welcome Sign in every town you go to". 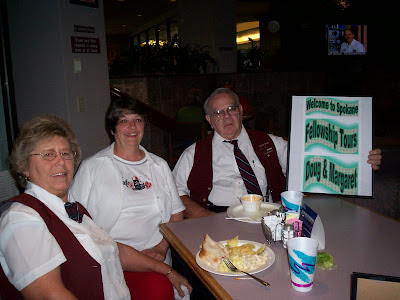 This is my friend Evelyn. 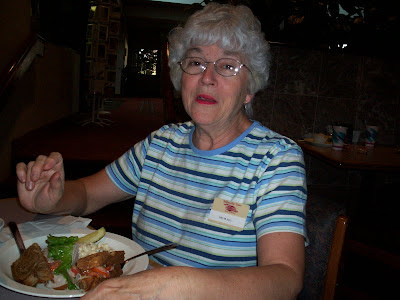 and this is my cousin, Margaret. 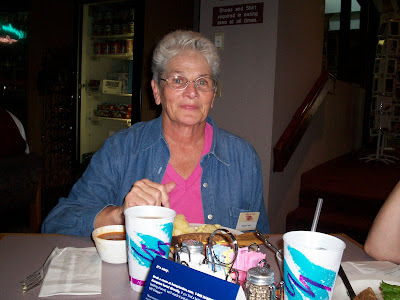 Evelyn and Margaret went to high school together and graduated together a few years ago. I thought it was neat that they were able to make the trip together.

Here is a picture of the five of us. Left to right ,Margaret, Margaret, Jenny, Evelyn and Doug. 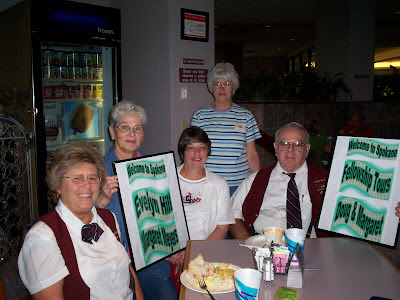 If you ever want to take a tour I would highly reccomend fellowshiptourstn.com. It is based out of Gray, Tn. Just give them a call and don't forget to tell them "Jenny sent you".

As always, in the words of my father, "That's it For Today".

I am so glad that the fire is mostly contained, and that you are out of harm's way.
You have a lovely family.
Happy Trails, Penny