Well, there is not much to write about, the weather has been rather nice. A bit of rain but none of that white stuff.
My in box for email has really been busy lately. A couple of my readers asked that I post a picture of myself so they would know who they were talking to. Well, I dug around until I found a couple so here you go. A few years back the grandkids wanted a garden. We planted sunflowers. Really tall sunflowers.

Here is another of a couple of full timing RV friends Larry and LeAnnI met up with in Coeur d'Alene. We went out to breakfast and spent the day together. 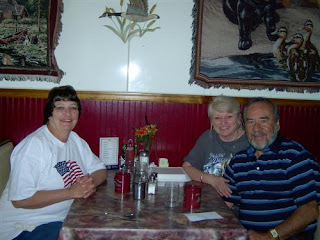 Here is some of what Leann said in her blog about our day together.

Jenny drove in from Spokane, Washington this morning to have breakfast with us. Took us to a great little family run restaurant called "Down the Street." Jenny has lived in this area on & off for the last 35 years & boy, did she turn out to be a great tour guide!We decided to head to the Silver Valley, an area producing 1.186 BILLION ounces of silver between 1884 & 2003, still going strong, with over six million ounces produced just last year. We stopped in Kellogg next. In 1885 a gentleman by the name of Noah Kellogg, a gold prospector and carpenter, lived in the Town of Murray which is 20 miles northeast as the crow flies. Being a gold prospector down on his luck, he ran around the Town of Murray looking for someone to give him a grubstake. He finally ran into two business men, Mr. Peck and Mr. Cooper, who loaned him enough money to buy grub and they loaned him a jackass (burro) to carry the tools. He started down the great north fork of the Coeur d'Alene River, came onto a trail and headed south over the mountains. Coming out on the south fork of the Coeur d'Alene River, he crossed it and went further on south up Milo Gulch and ended up about 1,000 yards above the present City Hall of Wardner. There he made camp, ate and went to sleep, and during the night, the jackass wandered off. In the morning he got up looking around for the stupid animal and hearing him braying, spotted him way up high on the hillside. Where the animal was standing he saw the sunshine glittering on something which turned out to be a large outcropping of galena (lead ore). And that was the discovery of the great Bunker Hill and Sullivan mines on September 4, 1885!

Further down the road we entered Wallace, one of the last towns in its entirety listed on the National Register of Historic Places. We stopped at a cute little park & took the other miners photo with his family. Loved the "your dog is cute sign!"Then our tour guide (Jenny) decided to take us to the town of Burke! Hah! She took us down what looked to be a great road that got smaller & smaller & finally turned to gravel & then to potholes & rocks the size of cannonballs! After bouncing along for 1/2 mile we all decided we had had enough of that (we still had 12 miles to go!) so we made a fast u-turn & headed back to Wallace. We did pass the most interesting 4 little towns we've ever seen & just had to take a few pictures of their historical signs. Make sure you read them ok. As many years as Jenny has lived in this area she never got to have the opportunity to travel on this particular path.

Larry and LeAnn started fulltiiming in May of 2006. They were absolutely wonderful people. We still keep in touch I know I hope to see them again in my travels.

Another couple I had the privilege to meet was Jo and Fred Wishnie. The Wishnies also "chucked" everything in 2006 for life on the road. I met up with them again in Coeur d'Alene and spent a couple hours visiting. I absolutely fell in love with their little dog Boo Boo. She was just the cutest thing. Couldn't resist posting a pic of me and Boo. 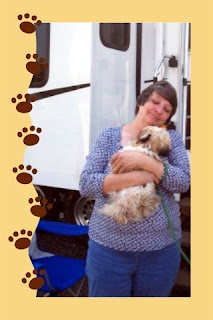 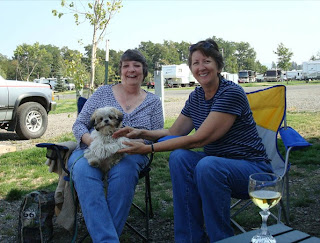 Here is what Jo had to say about our visit.
It was a blog reader's bonanza in Coeur D'Alene as we were pleased to meet another of our readers, Jenny Johnson.Jenny is a WannaBe fulltimer. She has a lot of camping and RV experience and is dying to go out on the road. Now we don't want to be responsible for anyone else's life, but all we can do is share our happiness for the lifestyle and let people make their own decisions. We really loved Jenny. She is a sweet person and we think she would do fine RVing on her own if she chose to.

We shared some of our fine (2 buck chuck) wine, had some laughs and talked RVing for a couple of hours, while Jenny loved up our little Boo Boo.

The Wishnies are more wonderful people out there on the road. I know our paths will cross again. No photo of Fred. Sorry Fred. 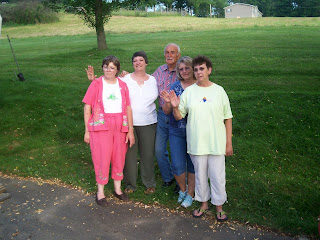 and in the words of my father "That's it for Today".

Posted by Jenny Johnson at 9:00 PM

Thank you so much for the wonderful pictures. It's great having a face to match the name. See you on chat!!!

Thanks for the nice mention in your blog. We so enjoyed our visit, and hope we will see you again.