Well, this is the last day of the month. I reached my goal this month of 31 posts. February is coming up and it is a short one and we will be on our way to spring (we hope). The weather has taken a turn for the better. The temperature is climbing and the leftover snow - you know that black yukky stuff is slowly melting. It feels good just to see the sun.

Maybe I will take some photos of the new change in the weather. Or better yet here is a photo of the weatherman and you know who...maybe it helps to have friends in high places. 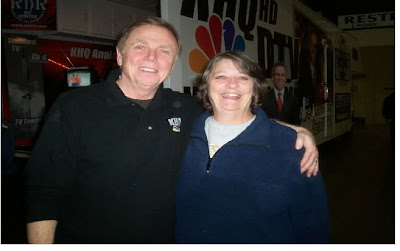 On another note, today is the Super Bowl. First it was all the hoopla about the politics and now we have the same for the Super Bowl. I am not a football fan. I don't know much about the sport but I know all I care to know.

Instead of watching the football game. I think I will spend the time making my funeral arrangements. After all if I don't make them who is going to know what to do with my remains, who will drive the Brink's Truck (unlike some people who will insist on driving their own truck to the gates of heaven) and who is going to enforce the dress code at my funeral.

Here's a football funny for you.

A guy took his blonde girl friend to her first super bowl game. They had great seats right behind their team’s bench.

After the game, he asked her how she liked the experience.“

Oh, I really liked it,” she replied,” especially the cute guys with all the big muscles; but I just couldn’tunderstand why they were killing each other over 25 cents.”

Dumbfounded, her date asked, “What do you mean?”

“Well, I saw them flip a coin and one team got it and thenfor the rest of the game, all they kept screaming was:‘

Like that one Jenny. Never heard it before... You really do come up with them.

Great blog! Since I am a new reader, can you tell me where to find your profile and/or more about you and your desire to become a full time RVer?
As a fulltimer myself, I am curious about the 11 ft RV as well! That's a pretty small space to live in!
Joy and Phil